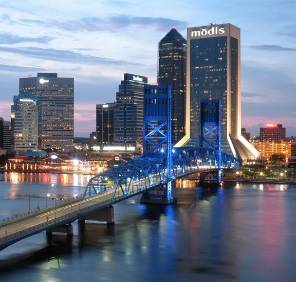 There are other cities named Jacksonville in USA

Car rental near Jacksonville in Florida

Car rental in airports near Jacksonville in Florida

Rental cars in downtown around Jacksonville in Florida

Be sure that you will never pay high prices for car hire with car rental Jacksonville. Unlike other car rental companies, we work with the best suppliers and bring you the highest quality by the cheapest prices!

A city located in the north-east of Florida. Jacksonville speeded over a huge territory of nearly 2,300 square kilometers. This makes Jacksonville the largest city in the continental United States by area; only a few cities in Alaska have the larger area because of the vast geographical boundaries. By the end of 2010 Jacksonville was among the ten fastest growing cities in the United States.

Map for car rental around Jacksonville in Florida

In the U.S. there is no "right-hand rule." The first uncontrolled intersection drives that driver, who first approached it. But if in a hurry, you can have the way, even if you're not the first to come to the crossroads .Also, in the States, there is a rule that allows turning at a red light. The speed limitation in urban areas must be observed, however, for the excess of 5-10 miles / hour you are likely be punished.

A complex of Jacksonville Landing and the waterfront part of Jacksonville Riverwalks are popular attractions in the center. Landing is a two-level complex of steel and glass with an orange roof, situated on the north bank of the St. Johns River. The complex consists of shops, restaurants and entertainment venues. Riverwalks embankments are on both sides of the river, the northern embankment Northbank Riverwalk has a length of 3 km, the southern Southbank Riverwalk - 2 km. It is perfect place for driving on your rental car with car rental Jacksonville!

On the south embankment in the St. Johns River Park you can see famous "Fountain of Friendship" - one of the most recognizable and popular attractions for locals and tourists in Jacksonville. When in 1965, the fountain was built; it was positioned as "the highest and largest fountain in the world." In 2010-2011, the park and fountain seriously reworked. Also you can find the most visited museums in Jacksonville - Museum of Science and History on the southern waterfront. Make sure you ordered car rental services Jacksonville for riding through these wonderful places!

Bridge Jacksonville's Main Street Bridge is crossing the river in the heart of downtown, and one of the most recognizable symbols of the city. This is a vertical lift bridge, which means that the entire middle section of the bridge lifting up the towers to the high court passed the river. In addition to the four lanes of traffic, there is a sidewalk, which makes it popular for joggers and walkers. Car rental Jacksonville recommends you to drive through this bridge and see beautiful views of Jacksonville State.

There are many great zoos in the cities of the United States. Jacksonville Zoo is not exception. It is located just on the north of downtown. Jacksonville Zoo and Gardens, with its 2,000 animals and 1,500 rare plants is one of the key attractions of the city. It was opened in 1914 and now attracts 700,000 visitors each year, which is more for the average US Zoo. Twist the engine of your car rental vehicle and drive to beautiful local Zoo right now!

Other cities around Jacksonville